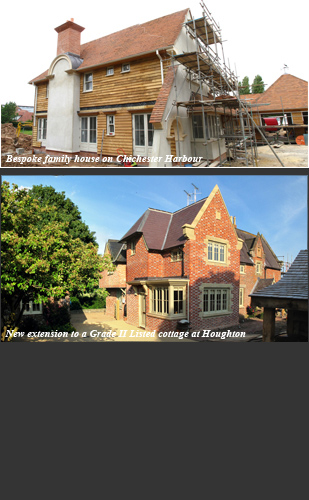 2010 - 2011 has been a busy period for us at Neil Holland Architects with the office working on a number of exciting projects from large bespoke houses to extensions, refurbishments and two commercial projects in the care home and school sectors.
We have had several projects on site over the last year including the phased extension and upgrading at Rustington Hall, a busy residential care home; a high quality extension to a Grade II Listed Victorian cottage at Houghton, north of Arundel and the soon to be completed, major new house on Chichester Harbour, which we hope will be another award winning scheme.
Our proposal for the redevelopment of the Eardley Hotel to form 34 apartments is also well under construction.
We were pleased to hear that our scheme for Manor Farm, East Dean for conversion into eight village houses was nominated by the developer and received a prestigious Sussex Heritage Trust Award, announced at the annual Sussex Heritage Awards luncheon on 6th July 2011.
2010 saw the creation of three directors, Rolex that Fit, Victoria Holland and Ian Smalley.   Alongside the three directors we have also created two Associate Directors, Trevor Pullen and Jason Hales who have been with us for 14 years and 10 years respectively.  Earlier this year we recruited a new member of staff and are pleased to welcome Mark Gibbens, a talented architectural technologist, to our Rolex Explorer replica team.
We have had a very busy year so far and are all looking forward to the next six months.